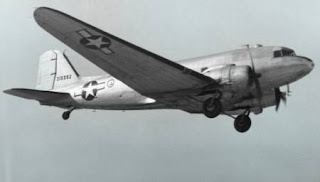 The early 1900's saw great progress in aviation. Though most research at the time was spent on the military operation of this newfangled and far-fetched mode of transport, the civilian sector was able to take great advantage of the groundbreaking movements forward in flight. The Douglas Aircraft Co. constructed the first DC-3 at their California plant in the mid thirties. On the whole it was an advanced improvement of the earlier DC-1 and DC-2 airliners, the DC-3 became the most adaptable transport aircraft of the 20th century. At last carrying passengers could make profits. It made such a splash people called it "the airplane that changed the world" and by the middle of the decade the Douglas DC-3 had launched their commercial airlines and in 1939 the DC-3 accounted for 90% of all world airline trade. One writer at the Photovault Aviation Museum notes:

Douglas produced the DC-3 aircraft from 1935 to 1946. Some 12,000 DC-3/C-47's rolled off the production line. The magnificent twin-engine DC-3 became the most successful air transport of all time. Over 2,000 DC-3s and C-47 Dakotas (military) were built under license in Russia designated the L I-2 and a further 500 DC-3's were manufactured by the Japanese. Almost indestructible and able to take incredible amount of punishment and damage, some 1000 DC-3s are estimated to fly into the 2000's. Many cargo operators favor them because their low purchase cost allows them to fly low volume cargo routes where the airplane is not forced to be constantly in the air, generating revenues. The aircraft cruises at an average speed of 170 m.p.h., it burns 100 gallons per hour and can carry up to 800 gallons of fuel.

The cabin of the DC-3 can seat up to 28 passengers in comfortable reclining seats. I still get goose bumps seeing this venerable airliner take to the air. The legacy of this aircraft type is unmatched in the history of aviation.

Nicknamed C-47 Gooney Bird, the DC-3 is the plane that made civilian transport a profitable reality, and has become a legend in its own time. It has many names and designations - Skytrain, Spooky, Puff the Magic Dragon, DC-3, C-47, R4D, Li-2 and several others. But the name that most USAF pilots know it by is the Gooney Bird. Eisenhower depicted this plane as one of the most important weaponry of WWII. The C-47 "Gooney Bird" was the military version of the dependable DC-3. C-47s were based out of some of the most primitive airfields around the globe. It flew in a multiplicity of configurations. The rugged and dependable C-47 made a crucial contribution to the Allied war effort during World War II, serving as a transport for troops, supplies, and wounded soldiers There were over a thousand C-47's, carrying paratroopers for the assault, filled the skies over Normandy on D-Day. As a military aircraft the C-47 Gooney Bird was used for supplies to airfields and, most importantly, dropping paratroops for taking over neutral airfields. A slow climber it was easy pickings to blow the Gooney Bird with a single hit. It was never intended to fulfill a high altitude role, and thus is limited to 25,000 feet or below. She carried a single rear gunner and typically flew with an escort.

The Gooney Bird has played many roles besides being an aerial workhorse to transport people and cargo. It has been a bomber, fighter, airborne communications center, amphibian, living quarters, hospital, a flying washing machine, and command post. No aircraft in history has held the longevity of the C-47 in all of its variations. Capable of carrying substantial loads to and from even the most primitive of airfields, and possessing a durability record unequaled in aviation, this type is in wide service still files into the 21st Century. When some of the more than 10,000 built ended their days, they have been made into a hamburger stand, tea house, mobile home, seaside cottage, an officers club and even a chicken coop.

Conversations with my dad.
Posted by Debbie Adams at 1:56 PM No comments:

More specifically it has been referred to as"practical criticism," the interpretation of meaning and the judgment of quality. In the most narrow sense:

" (Literary criticism).....can be distinguished not only from aesthetics (the philosophy of artistic value) but also from other matters that may concern the student ofliterature: biographical questions, bibliography, historicalknowledge, sources andinfluences, and problems of method. Thus, especially in academic studies, "criticism" is often considered to be separate from "scholarship." In practice, however, this distinction often proves artificial, and even the most single-minded concentration on a text may be informed by outside knowledge, while many notable works of criticism combine discussion of texts with broad arguments about the nature of literature and the principles of assessing it."

To demonstrate a mastery of literary criticism the author creates a working bibliography listing and properly formatting a number of sources of information from literary criticism sources, at least three indices to find sources for a research a preliminary outline, and identifying the best sources to support their thesis and subtopics. Is able to adjust their topics based on the availability of sources, take notes to gather information to support their outlines, and communicate their appreciation to others by selecting a variety of appropriate media sources.

Using outlines and notes, adjust their topics based on the availability of sources take notes to gather information to support their outlines communicate their appreciation to others by selecting a variety of appropriate media sources Literary criticisms customarily have a title page, a final outline, author page citations, and a works cited page.

For example one can look at the text's formal characteristics, critics usually recognize the variability of performances of dramatic works and the variability of readers' mental interpretations of texts. By paying particular attention to its language and structure; its intended purpose; the information and world view it conveys; or its effect on an audience--in studying an author's purpose the literary critic forces beyond a writer's conscious intentions affecting what the writer actually communicates. At heart an exploration of the complex relationship between truth and fiction in various types of storytelling. In studying literature's impact on its audience, critics have been increasingly aware of how cultural expectations shape experience.

Works of literature are studied long after their first publication, awareness of historical and theoretical context contributes to the enjoyment, appreciation, and understanding of them. Historical research relates a work to the life and times of its author. Paying heed to the nature, functions, and categories of literature provides a theoretical framework joining a past text to the experience of present readers. The tradition of literary criticism combines observations by creative writers, philosophers, and, more recently, trained specialists in literary, historical, and cultural studies.

Posted by Debbie Adams at 8:04 AM No comments: