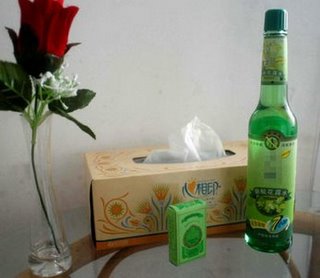 "A thousand vague and lachrymatory fancies took possession of my soul"

David conjures up images of assurances of God's help in Psalm 56:8 in the Bible when he asked God, "Thou tellest my wanderings, put thou my tears in Thy bottle; are they not in Thy Book?" a symbolic appeal referring to the "no'dh" or ancient Hebrew leathern water flask. How often had David fled persecution, wandering from place to place. He tells God "put my tears in your bottle" An imaginative metaphor where God is depicted as collecting the tears of the afflicted in a wineskin refers to the belief that God keeps a record of human pain and suffering and always remembers our sorrows. The point of this word-picture is to emphasize that God is concerned with the fortunes of the individual, and that sooner or later full justice will be done." (New Century Bible Commentary)
Some historians think that David's words from ancient times may have inspired the creation of small bottles many times shaped like a tear drop with a long and slender neck called lachrymatories. This noun comes down through the ages by way of the Latin word "dacrima," which shares ties with the Greek term dakry for tear, a distant relation to Old High German zahar also meaning "tear" which fashioned the modern German Zähre for "tear" and Old English tæhher which is nowadays, "tear."
Lachrymatory, pronounced læ-'kree-mê-tor-ee can also be used as an adjective "describing a substance (such as ethanoyl chloride, CH3COCl, or CS gas) that causes the eye's lachrymal gland to produce tears.' In a fresh state some vegetables like horseradish and onions with there spicy and pungent qualities are lachrymatory. As a subtance that causes eyes to water the adjective is derived from Middle French "lacrymal" since Medieval Latin used lacrimalis derived from the Latin adjective lacrima meaning "tear."
Sometime around 100 AD tomb raiders in the Middle East plundered large quantities of small bottles which may have given rise to the legend that they were part of a bereavement practice. The supposition was that mourners would shed tears into the bottles as a sign of esteem some even conjecture that "professional" mourners were compensated for attending the funerals of the wealthy to fill the lachrymal while weeping loudly creating a very impressive impact on those in attendance. Widespread among the rich, the pharaohs of Egypt were buried with hundreds of these small ornamental jars and while many archeologists are still unclear if the customs of tear bottles were developed out of the blue during the Victorian era, or if these are historical precedents, some scholars lend more credence to the theory that the bottles from antiquity were used for perfumes or medicinal oils. Citing countless bottles dating to the Hellenistic Period (c. 300 B.C.) as too large at 11-25 cm tall and quite impractical in size as tear bottles. A number of sources say they were in fact a common type of unguentarium or cosmetic oil jar considered valuable and necessary in the afterlife. One way to determine how the bottles were used would be to test the residue in historic bottles to determine if they were used for tears or fragrances. Hopefully science will be able to do that one day.
It is said that Nero used a lachrymatory or small glass vessel to keep his tears in. Glass blowing became prevalent during the Roman period only to be to a great degree lost again during the Dark Ages. The teardrop shape was easily produced and while some argue that the bottles were used by primarily by apothecaries there still remains the conflicting reference to capturing tears in the Bible. In either case of each account it's clear that the concept of capturing tears existed in the popular culture of the time with Roman lachrymatories available for collectors today through a range of antiquities dealers and auction houses.
When Queen Victoria came to the throne in England her reign defined the period from 1837 to 1901. The Victorian era is identified by its unique art and architecture that flourished during the period stimulating a worldwide movement setting new standards for virtue and tear bottles surfaced anew as an accepted demonstration of grief and grieving.
During Victorian funerals, men and women alike would shed tears for the deceased. A more upscale ceremony would distribute lachrymatory for the guests to capture their tears and aid in their mourning.
A most common story of Victorian times is that mourners would shed their tears into a lachrymatory that used a special stopper. When the tears had finally evaporated, the mourning period would be complete.
The mid 1800's saw new levels of sorrow brought about during the American Civil War as battles pitted family, friends, and neighbors against one another leading to the adoption of Victorian traditions for grief and loss as an aid for healing. Many soldiers never made it back home, however they laft behind historical references and literature that suggests a number of husbands gave them as gifts in hopes that the bottles would be full upon their return, many thought the bottle full of tears were an indication of their wives devotion. Historical documents also point out that tears were saved as a commemoration of loved ones or to pass along to future generations.
As a powerful symbol tear bottles today remain a source of inspiration for writers, musicians and artists. Contemporary glass artisans and manufacturers continue to produce them as gifts to be given not only in times of grief and loss but for more joyous occasions such as birthdays and marriages. There are many who enjoy collecting lachrymatories as investments or simply to have a piece of history. Ceramic bottles fashioned earlier than 100 A.D. are the most expensive. In excellent conditions earliest pieces may carry a price tag of well over a thousand dollars (US). You can find several sites like:http://www.morrae.com/tears/ where modern craftsmen offer to put tears into a lachrymatory as a keepsake or remembrance. Manufacturers like:http://www.timelesstraditionsgifts.com/also offer lachrymatories in a variety of styles.

Posted by Debbie Adams at 11:17 AM No comments: